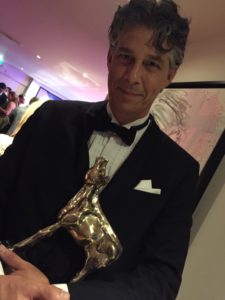 In 1991 Bob Soetekouw started his career at a small post-production company in Hilversum called ‘Raster’.  At that time the company was working on international documentaries in co-production with Discovery Channel and BBC’s Channel 4. Raster was the second company in The Netherlands to invest in a revolutionary nonlinear editing system called ‘Avid’. And was also one of the few post-production company’s at that time that had a 3D animation department. All these ingredients of being on the technological edge of the digital era was for Bob as normal as second nature. In 1999 after 8 years working for ‘Raster’ Bob decided it was time to try his luck as a freelance editor. Until now Bob has worked on several feature films, documentaries, commercials, television productions, visual effects and 3D animations.

In 1996 I went to a workshop on Film Editing by Evan A. Lottman ( The Exorcist, Apocalypse Now, Sophie’s Choice) in Portland Maine. And on the first day one of the students asked Evan what the correct editing rules where for cutting a feature film. And Evan replied “There are no rules except for anticipating and keep in consideration the conditioning of the audience. And never forget, or cut to short, the incubation time it takes for the viewer to get emotionally involved by the acting and the characters”.

It took me a while before I could even begin to grasp the essence and thru meaning of what Evan was trying to teach. And he was a mayor inspiration for me for years to come.